Last year, Rangers General Manager Jeff Gorton announced that a rebuild will be forthcoming on Broadway.

With the Rangers’ 2018-19 campaign in the books and the offseason approaching, the future of the Rangers is looking brighter than ever before.

First, there was the draft lottery in which the Rangers moved from fifth all the way up to the second overall pick. With that pick, the Blueshirts are expected to select Finnish superstar Kaapo Kakko. (Provided the Devils take 17 year old Jack Hughes number one)

The first thing that stands out to me when it comes to Kaapo Kakko is not necessarily his eye-popping stats, but rather whom Kakko is playing alongside. Being an 18-year-old in the the Finnish Liiga is an extremely impressive feat that few have accomplished. Some notable names on that list include Patrick Laine, Sebastian Aho, Aleksander Barkov, and Hall of Famer Teemu Selänne.

In 45 games this season for TPS, Kakko has registered 22 goals to go along with 16 assists. His 38 points made him the teams 3rd leading scorer. To put Kakko’s stat line into context, Laine and Aho posted 33 and 11 points respectively in their pre-draft seasons. Aleksander Barkov registered 48 points in 53 games prior to being selected 2nd overall in the 2013 draft.

Kakko’s size, speed and skill, along with his experience playing against professionals gives him the potential to be a generational talent that the Rangers have not had since they drafted Brian Leetch 9th overall in 1986.

Only 6 days after the Draft Lottery, the Rangers finally signed Russian phenoms Igor Shesterkin and Vitali Kravtsov. Both propsects have been playing overseas in the KHL.

Impressed? You should be.

Although he was projected to go late in the first round, Jeff Gorton revealed that Kravtsov was the number 2 forward in the draft in his eyes. Kravtsov’s ceiling likely dropped due to his underwhelming regular season, but he caught the eyes of some teams after leading his team in points during the playoffs which ended just before the draft.

And in a short four months after being selected, TSN ranked Kravtsov as the #1 prospect in the world.

Why is he receiving so much praise from experts and hype from inside the organization?

In his first 32 games in the following season, he posted 17 points (6 goals, 11 assists) which were the most by a teenager in the 2018 campaign.

He set numbers as a teenager which surpassed those of Vladimir Tarasenko, Artemi Panarin, and Evgeny Kuznetzov.

He finished off the year with 21 points and helped move from last place in the conference to just one game out of the playoffs by the seasons end.

Kravtsov may or may not be the next great Russian superstar, but the 9th overall pick has the potential to be a top forward in coming years.

Lastly, Igor Shesterkin is possibly the biggest wild card in Rangers history. After being drafted in 2014, Shesterkin exploded onto the scene in the 2015-2016 season when he replaced Miko Koskinen to become the starter for SKA St Petersburg. Over the next two seasons, Shesterkin was excellent with a combined 47 wins to only 8 losses in 67 games played. He had a 1.67 goals-against average and .935 saves percentage with 15 shutouts over that span. In this past season, with Rangers fans finally noticing Igor’s play, the 23-year-old did not disappoint. His numbers only became better as he posted a ridiculous 1.11 GAA and a .954 save percentage in 28 games. Shesterkin, along with backup netminder Magnus Hellberg, led SKA to the conference finals.

Although his stats make him seem as the sure heir to Henrik Lundqvist’s throne, there are a lot of doubts–quite reasonably so.

First of all, SKA has and always will be the powerhouse of the KHL. That doesn’t necessarily mean that Shesterkins numbers do not show his true ability, but his stat line may be deceiving. During Shesterkin’s tenure, SKA decimated their opponents and won two championships. Although this was great for him and his status, the Russian net-minder faced a shots per game average in the bottom three of the league each of the four seasons he played.

Second, the style of play in the KHL is much different than that of the NHL. The games tend to be lower scoring with fewer shots on goal and far fewer crease battles. This can be backed up by an interview last year in which current Oilers defensemen Adam Larsson noted the decreased shooting ability and less tough competition in the Russian League compared to the NHL. As well, Olympic-sized ice surfaces mean longer shots with less traffic. Therefore, all these factors contribute to far higher save percentages among KHL net-minders.

Finally, there is one major predicament that comes into play with Shesterkin signing his two-year entry-level contract.

Before diving into the issue, it is important to note that Igor has the option to go back to Russia if he is sent down to the AHL. In a recent report though, the 23-year-old said he plans to stay in North America no matter where he is placed within the system.

Due to Alexander Georgiev having a breakout season this past year which was highlighted by his hot streak to end the 2018-2019 campaign, there will surely be a stiff competition between him and Shesterkin during training camp. If Shesterkin lives up to expectations and has a great camp, it would be a tough decision to have to send Georgiev down.

Does David Quinn dare propose a 3 man goalie rotation? Not likely, because that would mean losing a roster spot for a skater. Could Georgie and Shesterkin split time between Hartford and the big leagues?

Only time will tell what is to be, but faith must be placed into the hands of the Rangers management to figure out the best course of action before the season starts.

If Kaapo Kakko, Vitali Kravtsov, and Igor Shesterkin really do become franchise players, it is an exciting time to be a Blueshirt faithful. 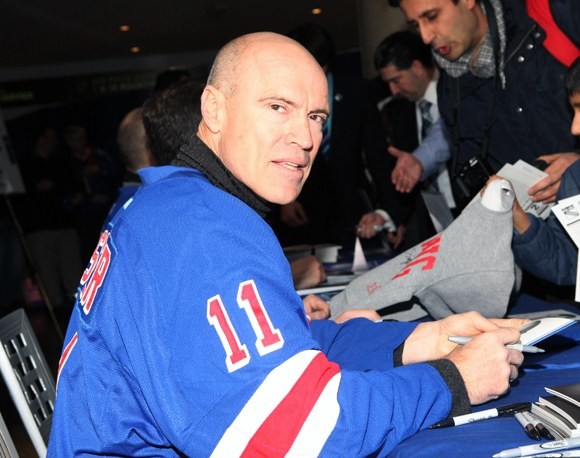 17 Thoughts on the New York Rangers

Similar to Elliotte Friedman’s weekly 31 thoughts article, I wanted to share my thoughts on the New York Rangers heading...

After an exciting opening night at the Garden, the Rangers traveled to Ottawa with hopes of building on their momentum following...

Everybody who signs up to our newsletter will get a free sticker! DM or text 732-362-4446 with your email address and full shipping address! While supplies last! #nyr

Not sure what is better. The setup for the goal or Ovi gliding in with no F's given. #nyr 🤣

Not sure what is better. The setup for the goal or Ovi gliding in with no F's given. #nyr 🤣